Warsong Gulch mechanism
Warsong Gulch is a 10 VS 10 map. The top and bottom shapes are equivalent. The base will refresh the speed of BUFF, which can increase your movement speed. The two cabins outside the door will stimulate the rage and heal BUFF. Furious buff remembers to give the highest DPS class in the team. After the battle begins, if you have low health, remember to use healing BUFF. Also, when you see the other person's buff refresh, remember to eat it, do not leave it to the other person. 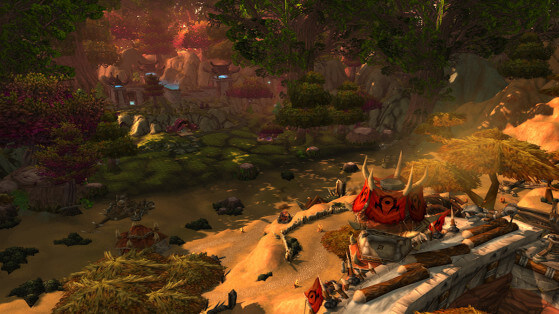 Winning experience
1. At the beginning of the battle, try not to let everyone impact the midfield together. Even if you succeed in the first round of hedging, it is easy to be taken away by the opponent's stealth profession. At home, you can capture the flag collectively compared to winning the battle. The success rate and efficiency of sneak attacks are often much higher. Therefore, the correct way to play is to let Rogue or Hunter go back to guard the base immediately after going out to play the first battle.

2. In Warsong Gulch, if you want to return the captured flag to the base successfully, you must be in a state where your flag has not stolen. Therefore, try not to fight in the opponent's base, return to your support as soon as possible to defend and protect the people who seized the flag. It is the most important thing to prevent your banner from being stolen, and the two sides caught in the mire of killing the flag bearers.

3. Players in midfield must pay attention to cooperate with players who steal the flag. When it is time to create pressure on the opponent, they must suppress it. When it is time to seduce the opponent to leave the base, you must pull back to the front. After the attack was successful and the flag obtains, the escort flag bearer should return home immediately. All Buffs must be given to the flag bearer for the first time. Control skills use first to rescue the flag bearer and protect the flag-bearer from returning to his base.

Of course, the situation on the Warsong Gulch battlefield has many emergencies, which are often difficult to predict. In this process, players try to protect their teammates as much as possible. The control controlled, and the concentrated firepower concentrated. Players can improve their win rate by mastering the best tactics and thinking about ways to deal with them.